Guilderland Public Library would like to thank everyone who participated in our mail-in ballot election.  Here are the results:

From the Altamont Enterprise: 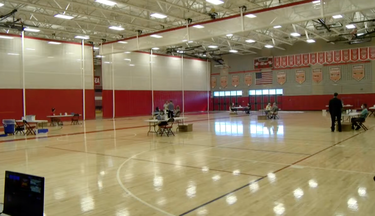 — Still frame from Guilderland Central School District ballot count
Livestream: Guilderland’s ballot count took several days. Of the roughly 24,000 ballots mailed to school district voters, nearly a third were returned. The 7,500 returned ballots were a record for the district.
GUILDERLAND — With mail-in ballots, Guilderland had triple the votes usual for its school and library elections — yet both budgets passed by wide margins.
The $4 million budget for the public library passed with 64 percent of the vote, and the $103 million school budget passed with 66 percent of the vote.
Guilderland schools Superintendent Marie Wiles called the response “record-breaking” and said, “The participation is awesome … I’m beyond thrilled.”
At the same time, voters returned three incumbents — Rebecca Butterfield, Judy Slack, and Benjamin Goes — to the school board with three-year terms, while two newcomers — Blanca Parker and Luciano Alonzi — won one-year terms.
For the library trustee elections, a five-way race for three seats, the two challengers — Marcia Alazraki and Richard Rubin — won seats along with incumbent  Mark Keeling. The other two incumbents — Philip Metzger and Herbert Hennings — lost their seats.
School-district voters also approved a $983,300 proposition to purchase seven 66-passenger buses and one 60-passenger bus with wheelchair stations and air-conditioning, with 4,681 voting in favor and 2,729 voting against.
Governor Andrew Cuomo, to stem the spread of the coronavirus, had ordered school districts across the state to conduct the elections by mail. School elections are usually held on the third Tuesday in May but Cuomo set the date this year first for June 9 and then extended it to June 16 when some districts had trouble securing ballot envelopes.
On May 29, Guilderland mailed more than 24,000 absentee ballots to all qualified voters in the school district; nearly a third were returned.  Poll workers in Guilderland counted the votes by hand, on tables set up in the high school gym. The counting was live-streamed.
The results in Guilderland were typical of those across New York State — many more people voted than usual and 99 percent of school budgets passed, according to an analysis by the New York State School Boards Association.
Schools statewide proposed an average tax levy increase of 2.34 percent for 2020-21, according to the association.
Districts that proposed budgets that stayed within their tax levy caps — and so needed only a simple majority to pass — had a passage rate of 99.6 percent. Districts with tax levies that exceeded their caps and required a 60-percent supermajority had a budget passage rate of 63.6 percent.
The average proposed year-over-year spending increase for the 2020-21 school year is 1.67 the association said, which compares with an average increase over the previous five years of 2.25 percent.
Guilderland Public Library
“We appreciate the vote of confidence from the Guilderland community,” said Timothy Wiles, director of the Guilderland Public Library, on Thursday. He is married to the school superintendent.
“We are excited to move forward with our reopening plan and our expansion,” said Wiles, adding that it would have been tough to build a new budget.
The library’s $8 million capital project, passed by voters last year, is progressing on time and on budget, Wiles had said earlier.
“We intend to go to bid in October,” Wile said. “Then we’re dependent on the industry and the weather. The first step will be an addition on the east end of the current building to house children’s services.
The library will stay open through most of the renovations and the project is expected to be completed by the summer of 2022, Wiles said.
On Thursday, Wiles said, “I thank people for voting.  I’m a believer that your vote counts a lot.”
Usually, about 2,500 people vote on library budgets, Wiles said although last May, with the simultaneous vote on the capital project, about 4,200 people voted.
This year, the $4 million budget passed, 4,769 to 2,677.
Of the 7,446  votes cast, and the 64-percent in favor, Wiles said, “I think it means people like what we’re doing. I personally think education and libraries are a great investment in the future.”
Even in the midst of hard times caused by the pandemic and resulting shutdown, Wiles said, “It’s great to see voters thinking of the future.”
About a third of the library’s $4,080,178 budget for next year is for salaries and benefits as the library has 34 full-time and 21 pat-time workers. The next biggest expenditure is for materials.
The library gets very little state or federal funding and so is largely dependent upon property taxes for its revenues.
These are the results for library trustees; the top three will serve five-year terms on the 11-member board:
— Marcia Alazraki, making her first run for the board, garnered 4,053 votes. A retired lawyer, she said she grew up poor in New York City. “My library card was precious,” she said, “and books opened up the world to me and shaped my devotion to learning”:
— Mark Keeling, vice president of a national insurance company, won another term with 3,208 votes. He said, “It is important that the library remain fiscally responsible and at the same time provide robust resources for our community”;
— Richard Rubin, making his first run for trustee, won a seat with 2,852 votes. A medical doctor with a master’s degree in business administration, he said that background will help in planning programs and building budgets;
— Phil Metzger garnered 2,775 votes. He works as a lead systems analyst for a communications company and said, with an inside connection, he understood libraries’ needs and challenges; and
— Herb Hennings, who is retired from his work as an insurance fund representative, received 2,549 votes. He has lobbied the legislature for increased funding for local libraries, both construction aid and general aid.
Wiles thanked all five candidates who ran for the board and commended the two trustees who were defeated, calling Metzger and Hennings “two very fine trustees who have served the library well during their terms.”

Voting on our annual budget and Board of Trustees candidates is being conducted solely by mail-in absentee ballot this year, per Executive Order.  Guilderland Central School District mailed absentee ballots with a prepaid return envelope to all qualified voters on May 28.  Please see www.guilderlandschools.org for questions regarding this year’s voting process.

Please see www.guilderlandschools.org for questions regarding this year’s voting process.

Guilderland Public Library has five candidates for three open Board of Trustees positions – three incumbents and two first-time candidates.  They are, in ballot order:  Marcia Alazraki, Herbert Hennings, Mark Keeling, Philip Metzger, and Richard Rubin.  More information on our proposed budget, which remains under the tax cap with modest adjustments, may be found by clicking on this link: